A Kidney Stone Does Not Equal Childbirth 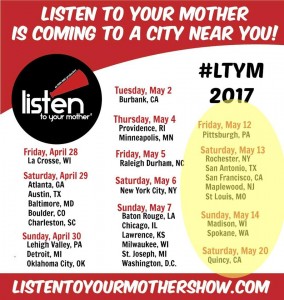 An essay performed at the 5th Annual Listen To Your Mother Event - St. Louis; Saturday, May 13, 2017

I farted while walking out of a fancy Indian restaurant after having enjoyed a very nice lunch with my husband. It wasn’t one of those SBD farts—you know, silent but deadly that anyone could have let slip out. Had it been, I could have discreetly walked out and no one would have been the wiser. Fortunately, I was walking toward the door, so I just kept on going and marched down the street like the businesswoman I appeared to be.

Only one couple remained in the restaurant. Maybe they thought it was the server who was straightening a table near the exit. I hoped so, because I talked to that woman in the hallway near the restroom, and I got her phone number so I could give her a makeover with my Mary Kay business.

I looked so sharp that day, too. I wore a bright blue suit, matching scarf, and coordinated jewelry; my curls were coiffed to a professional, yet fun, look. Until my heel hit the ground a little too hard, and there it was—the fart that announced my departure.

I didn’t even know it was there, lying in wait, like a leopard waiting for the precise moment to pounce on its prey. Little did I know that my put-together-having-a-fabulous-day-getting-new-names-for-my-business-having-a-rare-lunch-out-with-my-husband-looking-great-self was the prey this secret fart was after.

I never called that woman to book her facial because I was afraid she thinks I’m the lady in the blue suit who farts. It’s a good thing I didn’t sneeze, or I would have peed, too (it’s the post-partum form of multitasking). If I would have dropped something and bent over, all hell would have broken loose.

My husband thinks that because he had a painful kidney stone that landed him in the emergency room, he has experienced the equivalent of childbirth. This argument doesn’t wash with me. He was given drugs that knocked him out. He got to sleep through it. When it came time to pass the stone, all he had to do was pee into a strainer. The stone was like a large grain of sand (oooooh! Congratulations! Let me order the balloon bouquet!).

This is nothing like a nine-pound baby or the two eight-and-a-half pounders who followed. I like the late Robin Williams’ suggestion that, “Guys who want to experience childbirth can ‘open an umbrella up their ass.’”

But let’s say for the sake of argument that the pain of a kidney stone is equivalent to the pain of labor. My husband does not live with the long-term effects of childbirth on his body. Passing a tiny pebble has not stretched out anything. I don’t hear his gastrointestinal tract ambushing his professional image. I don’t see him leaking when he sneezes. In fact, I don’t see him multitasking at all.

I discussed this loss of lower extremity control with an OB/GYN at a dinner party. I asked if Kegel exercises would help—you know—suck up the farts. With her hands dancing in the air above our plates, like finger puppets in the shapes of vaginas and anuses, she explained that Kegels would not help the back-end, but that surgery could repair all of my stretched or torn parts.

Her personal and medical conclusion was that we each have to decide what our limit is, what is tolerable for us and what is not. She herself had bladder-repair surgery. Her deciding moment was when she and her husband were at a party and she had had a little too much to drink. They were dancing the polka and laughing, and she was peeing across the polka floor.

Another friend shared that jumping on a trampoline after two beers also produced similar, unexpected results. My fart didn’t seem so bad after hearing these stories!

So, ladies, we could decide to polka under the influence, trampoline after two beers, and just put up with the inconvenience and embarrassment, as we gush about how these beautiful children make it all worth it. Or, we could decide to have surgery to repair it all.

Which brings me back to my original point: a kidney stone does not equal childbirth!