We are All Beggars 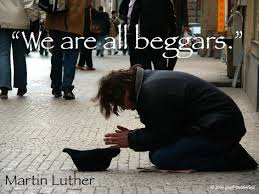 The distance of 20 centuries melt before our eyes as the Pharisee lays bare our secret thoughts. Thank God I am not like them.

We think it without even noticing sometimes--comparing, appraising, judging-- jockeying for our imagined superiority with practiced mental gymnastics that allow is to feel better about ourselves for one more hour or one more day.

The whole advertising industry feeds on our insecurities born of comparing ourselves to the person next to us or worse, to some artificial ideal--whether of attractiveness, wealth, success, social status, moral superiority or religious devotion. As if on cue, a new movie called “Keeping up with the Joneses” hit theaters just this past Friday.

The Temple rituals and structure in Jesus’ time was also based on the stratification of society. If you could enter the Temple and how far you could go in depended on your religious and social status, and whether or not your were purified through ritual washing. Only the high priest was allowed to enter the holy of holies--the earthly dwelling place of God’s presence; it was blocked off by a thick curtain and the high priest entered it only once a year to atone for Israel’s sins. Those considered unclean--the poor, the sick, prostitutes, tax collectors and sinners--were not even allowed inside the outermost gate.

As in ancient times, this problem runs much deeper than social status, and acceptability. We ascribe our stratifications to God whom we believe has more love for those who are “better” people and less love for those who are worse. God loves us churchgoers more than those uncommitted spiritual but not religious people out there. God has less to forgive of me, then those in the county jail, and so on.

It’s like we put faith on a bell curve-- the small group at the high achieving end-- like Martin Luther, Mother Theresa, Dr. King, Dorothy Day, or Nelson Mandela. We’re not quite as good as they are, but we’re in that big group in the middle of the bell curve-- we go to church, we volunteer, we help others when we can. Then there’s the miscreants at the other end of the bell curve--those people on the other side of the political spectrum, criminals, addicts, the homeless--whomever we disdain the most.

Verse 9 of Luke 18 says that Jesus told this parable to some who trusted in themselves that they were righteous and regarded others with contempt. That’s the poison of our comparison game--we can’t remain self-righteous without developing the accompanying hatred for the other.

We develop the most contempt for those we fear we might become. One of my favorite writers, Anne Lamott, says it this way, You can safely assume you've created God in your own image when it turns out that God hates all the same people you do.

We see this so clearly in the Pharisee in this parable-- On the upside, he seems to take great joy in being able to fulfill the religious rules so well, he really is devoted -- I fast twice a week; I give a tenth of all my income. It’s the pride that gets him: And look here, I am praying in the inner court of the Temple because I am so awesome. I am so easy to love because I am so pleasing to you.

His arrogance puts a barrier between him and God, --he trusts himself rather than God. He credits himself with his blessings, rather than coming to God with a heart of gratitude, giving thanks to the Source of all of who he is, all of what he possesses, and all of what he can do.

Jesus contrasts him with the tax collector--which actually when we look closely at the Greek, is actually a toll-booth collector. This man is not skimming off the rich, as did Zaccheus in the next chapter of Luke, but rather he’s at the bottom of the economic rung. He’s the person sitting in the toll booth, collecting fees from those who use the roads. His work exploits the poor and benefits the Roman occupiers. He knows his work hurts his people, yet if he were to stop, how would he feed his children?

It’s intriguing that the toll-booth collector offers no promise to change his line of work or his behavior. He doesn't try to bargain with God. He throws himself on the mercy of God, begging for forgiveness and trusting that all good and blessing in his life comes not from his own efforts, but from the God of love, mercy and forgiveness. The toll-booth collector is too desperate to divide people into stratifications for he is too aware of his own great need. His brokenness opens him up to God in inverse proportion to the barrier that the Pharisee erects with his self-congratulations.

Where does this leave us? It might be tempting to leave here and say, Thank God I am not like that self-righteous Pharisee! Thank goodness I’m humble! (my first thought when I read this passage!), but that would be missing the very point. For as soon as we fall prey to dividing humanity into groups, we align ourselves squarely with the Pharisee who trusts himself more than God. And anytime we try to decide who is in and who is out, we will most assuredly, find God on the other side.

Through this parable, Jesus invites us to take our focus off the Joneses, and off our self, and put it back on God--the God who alone is the judge of the human heart; the God who chooses to justify the ungodly and yes, the undeserving, with unmerited love and grace.

For this God sent his only Son, Jesus Christ to offer himself for all of us who sin and fall short of the glory of God. When Jesus died on the cross, that dividing Curtain in the Temple was torn in two-- erasing all divisions of humanity before God. As the curtain tears, the thread that forms our supposed bell curve, pulls loose--the curve collapses and we all land on a level plane before God and beneath the cross.

Because it’s not what we do that bring us to God, it’s what God does for us in Jesus Christ that brings us to God.

On his deathbed in 1546, Martin Luther scribbled 6 words on piece of paper: We are beggars, this is true.

With the toll-booth collector and the Pharisee, we are all beggars, freed from worrying about ours or anyone else’s status. We are freed to live by the love and forgiveness of Jesus that embraces and feeds us today, a love that knows no human boundaries and begs to be shared with others.

DT Niles, one of the founders of the World Council of Churches, has been credited with summarizing our -mission as the church with these words, evangelism is one beggar showing another beggar where to find food. People everywhere are hungering for the food of God’s love and that’s our mission as ones who have been loved, freed and forgiven in Jesus Christ.

We are all beggars, that is true, but no one is beyond the beating heart, the pounding feet of a God who searches for the lost. So go, therefore, beggar of God, and share your bounty.