Jesus' Crucifixion and the Creative Power of Birth 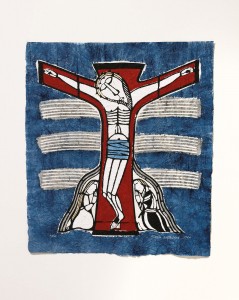 You never know what’s going to come to you when you pray and meditate. Prayer is really an adventure to explore what the Spirit might say, show or give you. I have been pondering one such prayer adventure from just before Easter  two years ago, when I walked a Labyrinth with the intention of meditating on the crucifixion of Jesus (a labyrinth is pictured at the top of this website).

I have often wondered, why so much suffering? There were ways to execute people even in the first century that didn’t involve this level of torture, of extended pain.  In the Exercises of St. Ignatius of Loyola, retreatants are invited to imagine themselves in the Bible story. I have pictured myself at the foot of the cross, with an overwhelming urge to push Jesus up and relieve the weight that pulls his hands and feet downward around the nails. As I held the image of his hanging in my mind’s eye and wound my way through the labyrinth, a new understanding came to me. It felt like it was so obvious, how had I missed it all these years?

Jesus’ crucifixion—the whole bloody, messy, suffering process—offers us a male archetype of birth and creation. Jesus’ crucifixion can be viewed as the labor pains of birth—giving birth to new life, both to an eternal resurrected life after death, but also to a new existence here and now. Such a sacrifice and the new life that resulted brought resurrection into human consciousness with the possibility that we can live within a new reality on earth.

Birth is a process of pain and blood, of dying to self, and of relinquishing control. This process necessarily means sacrificing oneself, one’s body, one’s self-focused plans and desires in order to make room for the developing life within. I thought it was funny when I was first pregnant, that I was rearranging my whole life, schedule and diet for someone I hadn’t even met yet. I found that birth itself works not by fighting the pain, by resisting the process and by conquering it, but rather by letting go. I needed to relax and enter into the pain, releasing my desire to dominate the experience so that my body was free to let the birth take place. This became easier during my second and third deliveries because I was more willing to trust my body (and the babies weren’t posterior with their spine against mine like the first one).

Mothers experience that the only way to have any chance at new life is through dying to self, through menstruation and birth, through labor pains and hard work, through being fully present in suffering with immense love. Even if we have no children, women’s monthly cycle accompanied by blood and often discomfort, does not let us forget that the only way to bring new life is to participate in the creative life force within our bodies over which we have no power. In this way, women can be co-creators with God.

Throughout history and in many cultures today, including our own, manhood is defined by aggression, by taking possession, by creating something new through conquering others to gain what one wants (Trump has become very skilled at tapping into this idea of manhood and American culture). Sadly, it should not be a surprise that our colleges still have a “rape culture” in which young (white) men feel entitled to take what they think is their due and not suffer the consequences either that their victims do nor that poor or men of color do (witness the Brock Turner trial outcome). A rape culture is a natural outgrowth of an environment that glorifies domination, aggression, barely-regulated gun ownership, and the demonization of perceived enemies. Of course some men feel entitled to take what they want, to use force to gain power, and see other people and the creation as instruments to be exploited for their ends.  The violence of rape and sexual assault is aimed at the very center of a woman’s creative power to bring life resulting in the horrific consequence of making her body a place of shame and death. In order deconstruct the rape culture, we need to offer an alternative vision of manhood, one we glimpsed when two men on bicycles stopped the sexual assault committed by Brock Turner.

Christians of every stripe have not stood up and said that Jesus offers another definition of manhood, of creative power, of relationship, community, and enhancing all life. Instead, we as Christians participate through male language about God, church structures and stained glass ceilings, the belief that men’s power to create lies in domination and the maintenance of their acquired power.

Jesus came during Roman occupation and oppression—the epitome of this human model of creation through violent expansion. In order to birth new life, Jesus did the opposite:  he let go of domination and violence as a way to spread his message and bring about a new order.  Instead of military victory, the sacred presence of God came as one who dies to himself through pain and blood, embodying immense love and presence in the suffering and brokenness of the world. He conquered hurt by entering it, taking on pain rather than externalizing it to conquer others.

Jesus’ death makes clear that for men to become life-giving co-creators with God, they also must die to the self and sacrifice their body, their self-focused plans, and their need for dominance and power in order to create something new. In John 12, Jesus said, Very truly, I tell you, unless a grain of wheat falls into the earth and dies, it remains just a single grain; but if it dies, it bears much fruit. Like women, male creation and birth happens most powerfully through suffering, through the death of the ego, through taking on pain rather than lashing out and causing pain for others.

Perhaps this is why God came into human form as a male—we already had the female model of creation and birth.  Men needed to see that self-sacrifice rather than domination is the way to create anew. When we imagine Jesus on the cross experiencing the labor pains of birth while his mother, Mary watched, we behold two archetypes of birth. Mary gave life to Jesus through water and blood by surrendering to pain and a creative process beyond her power; Jesus gave birth to Mary’s eternal life through blood and water (from his side) by surrendering to pain and to a creative process empowered by God to end death and create a dominion of love.

Such dying to self in order to give birth mirrors God’s own self-sacrifice in creation. God could have remained an infinite, unfathomable ball of energy and light, but instead, God exploded out into trillions of galaxies with billions of stars in each one. Creation is in itself, a self-sacrificing birth in a continuous and evolutionary process of dying and creating new life. God’s whole being was undone to create something new. God is always on the birthing table inviting us to create new ways to manifest eternal love and goodness in the world. Women, through the cycles of our body and the process of giving birth, have a glimpse into how we participate with our bodies and our choices to bring life as co-creators with God. We all need men to embrace their co-creative power to birth new life.