Doubting Thomas: A Model for Ministry with Millennials 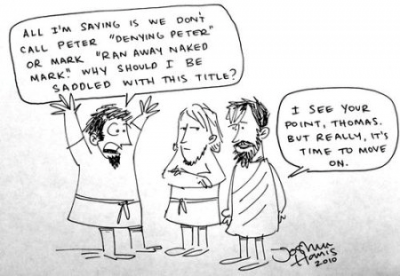 Can you imagine being called a Doubter for 2000 years? Thomas was also a Twin, but no one calls him that. Can you imagine showing off the family photo album? This is Laura, who married a nice boy from Bethany; here is Terrence—he runs a sheep-shearing business in Jerusalem; and that one’s Terrence’s Twin, Thomas —well… He’s a Doubter. What does a guy have to do to get a new reputation? Well, maybe Thomas' time has finally come.

The other disciples (in John 20:19-21) have experienced a miracle—Jesus, risen from the dead in the flesh and speaking to them. But Thomas wasn’t there—Scripture doesn’t tell us where he was, but I suspect that he was working.

Tradition holds that Thomas was an architect and a carpenter - a discipline that requires, not just that one talk about what he can build and what will look good, but proves it in reality with buildings that hold together, that withstand storms, and stand the test of time. In other words, in order to get new clients, Thomas had to “show his work.” I bet every student here has heard their teacher, especially in math, to “show your work!”

I’ve lived in Missouri for 23 years and the first thing I learned was that this is the “Show Me” state. Missourians are people who say, don’t tell me – show me!

And isn’t this the very nature of our tradition as Lutherans? Martin Luther himself said to the Roman church in the 16th century: Show me! Show me where indulgences, purgatory, & popes are in the Scripture? Instead, Martin Luther showed that we are saved by grace through faith and not by our own work or merit.

All of which is to say, that Thomas is not a Doubter – he’s a Lutheran from Missouri!

Thomas doesn’t want to be told what to believe—he wants to experience it for himself. He doesn’t want to take something as serious and life-transforming as Jesus resurrected from the dead on the word of someone else—especially when those someones are too scared to leave the house. He wants to touch, see and hear Jesus himself—“show me!” Thomas says. Thomas needs a real relationship with the risen Lord.

Thomas’ desire to experience Jesus for himself gives us a crucial window in how to be the church and carry out mission in the 21st century. Since the Reformation in the 1500’s, we have lived in what historians call the Modern Era—the Age of Enlightenment, the Age of Reason. Scientific understanding and methods, the power of logic, and tools of discovery have fostered the belief that that we can not only gain knowledge, but we can know THE truth—Truth that has authority in our lives. We trusted the authority of denominations, government institutions, scientific experts—we sang, Jesus Loves Me This I Know, for the Bible Tells Me So and that was good enough!

But now, as we began the 21st Century, we are leaving the Modern Era and entering the Post-Modern Era, even a Post-Christian Era.
• Truth claims no longer have the power they once did.
• Authority, including the authority of Scripture, is questioned,
• institutions are mistrusted,
• and the church no longer holds a central place in our culture and in people’s lives.

Those who identify themselves as “spiritual but not religious” is growing. That is, they believe in God and have a spiritual life, but do not express it by attending a church. Pew Research tells us that among the Millennial generation, especially those ages 18-34, a full 1/3 of them are religiously unaffiliated or are the so-called, “Nones” (not Catholic Nuns!) because they check the box, None, when asked about their religious affiliation. Is it any wonder? They have come of age in a time of
• dramatic climate change,
• war and terrorism,
• fewer job opportunities,
• rising costs and
• increased college debt.

Younger generations today are very much like Thomas—they say to us, Don’t tell me what to believe, show me! Don’t tell me about God and your faith, I want to see, feel, hear and experience it for myself. I’m not going to believe because the church or a book of ancient texts tells me to, Show me! Show me—not in a building or in an institution—beautiful and wonderful as it may be—show me out in the world—show me in your daily life.

Notice in our Gospel story, that Jesus offers Thomas exactly what he needs in order to believe in him! Put your finger here and see my hands. Reach out your hand and put it in my side. The resurrection is real, Thomas, you can believe! I am here to make a relationship with you!

Jesus also shows up for the other disciples too-even though they still seem to be locked in a room with door shut! Whether we’re locked up inside and afraid to go into the world, or whether we are like Thomas, saying, “unless I experience it myself, I won’t believe”—the good news is that Jesus appears to us to show us the resurrection is real. He loves us into a relationship with him.

Then Jesus says, Peace be with you. As the Father has sent me, so I send you. And he breathes on us the Holy Spirit—all the power we need to go out through the doors and into the world, helping people experience that the resurrection is real! Church tradition tells us that Thomas brought the Gospel through Syria, all the way to southern India where congregations in the state of Kerala trace their beginning back to the witness of Thomas!

Far from a Doubter, Thomas is the Patron Saint of our Post-Modern Era! The world will continue to change around us, but remember, we are Lutheran Missourians! Millennials, the Nones, the Spiritual but not Religious—that doesn't intimidate us. We’re all about that Show me-faith, Show me-resurrection, Show me-Jesus in the world. That’s our bread and butter!

Jesus calls us to follow him in giving the Thomases of today, the relationship with God that they seek, and the experience of the risen Lord that they crave. And that relationship begins with you and me. For this generation, the need to have a relationship and sense of belonging (which is not the same as "membership!") first and then they begin to believe (whereas in my generation, we believed in God and then found a place to belong). Young people today want to be involved in hands-on mission and service in the world and they seek authentic community. Terrific! We're experts at this! The congregation I'm serving as an Interim Associate Pastor has a community garden, they're taking youth on a mission trip this summer, they have a school that builds a relationship with Jesus as well as teaches knowledge, they give out sack lunches for members to give to people in need, they serve breakfast to the homeless every month, they have a Service Day coming up on Saturday, April 23rd with a group called Congregations in Service and the list goes on!

All we need to do when we encounter young people waiting on us at the Starbucks or the Jiffy Lube, or when we talk with our kids or grandkids’ friends, is to build a relationship with them. Get to know them and what they’re passionate about, what worries them and what they want to do about it. Then invite them to participate in the community garden, or serving the homeless breakfast, or Service Saturday or whatever interests them. They’ll enter into a relationship with Jesus and come to believe in God, when we love them and show them how faith gets lived out in the real world.

Then this new generation will join us and Thomas with the bold confession, “My Lord and My God!”