The Church in Fluxx 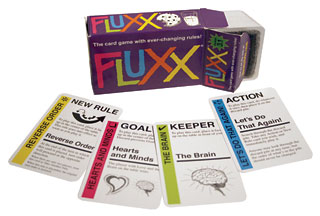 Over Christmas break Dan and I played a card game with our kids called, Fluxx. It’s not like anything we’ve ever played before because with each play, the rules of the game shift. One is dealt five cards and when played, some of the cards change how many cards you have in your hand, how many you can play, whose hand is yours, and even changing what wins the game. The goal is not to have a flawless strategy, but to have a flexible mind that can keep adapting strategy as the game changes with each card played.

We played Fluxx two times in a row, and in both instances the winner almost accidentally won—they kind of backed into it and winning came more as a realization rather than a well-planned and executed victory. We laughed hysterically trying to keep track of the play and Dan and I both noticed that the point of the game is not the winning, but the experience of being together when everything was in flux.

Afterward, Dan and I talked about how much this game is a mirror of being church in our current culture—everything is in flux. As soon as we think we have a handle on the norms, the technology, the way to do ministry or what we expect to be doing in the next six months, it changes and we find ourselves scrambling to catch up to the latest cultural shifts.

The church that I grew up in was based on established rules, patterns and expectations; when one followed the norms, one would usually get measurable results—good worship attendance, a balanced budget, growing numbers of children in Sunday School, Confirmation and Youth programs, adults engaged as programmatic volunteers. Pastors (myself included) and church members operated with the unspoken rule that as a member of the church, you would receive competent, attentive ministry from the hired staff (pastoral care, preaching, education classes, funerals, weddings, baptisms and so one, done all to your general liking). “Good” pastors would get the measurable results named above in this almost fee-for-service model.

But now in the “postmodern” era, all of this is in flux. We have thankfully shifted our understanding of the Christian church in that ministry is not “done” by the hired pastor and staff, but takes place in the lives of the people who the staff empowers and equips. The church members are the missionaries, rather than the recipients of ministry. The community, the city, the nation and the world make up the location of the mission carried out by the laity in the local congregation. Such mission is often harder to measure than the “butts and bucks” we so love to count, share, compare, and publish in our national church directories.

I think if the young Millennial generation experienced church more like a game of Fluxx, they would be more inclined to participate in doing good in the world through it. How flexible and adaptable is our leadership? Are we willing to ditch what no longer helps people deepen their relationship with God, even though we’ve always done it that way? Do we really incorporate new ideas from younger leadership or just want them to run a committee the way the last person did it and do we even need that Committee? Can we begin to experience the power of the Spirit in ministry experimentation in our neighborhood and let go of needing measurable results that can beef up our annual report?

Jesus did this very thing when he sent out the seventy in Luke 10. They were sent into the community in pairs to experiment with sharing God’s peace, love, and healing, and to experience the power of the Spirit who responds in the moment—in the flux of daily life and changing culture.

Play a game or two of Fluxx at your next church retreat or at the beginning of your meetings throughout the New Year as a way to practice adaptive, ever-changing, frustrating, hilarious community (there is even a Christian Fluxx!). It’s the way of the 21st century and it’s already 2016. Oh, and people like being a part of communities, even churches that have fun while sharing God's love.