A Sordid Tale of Sin 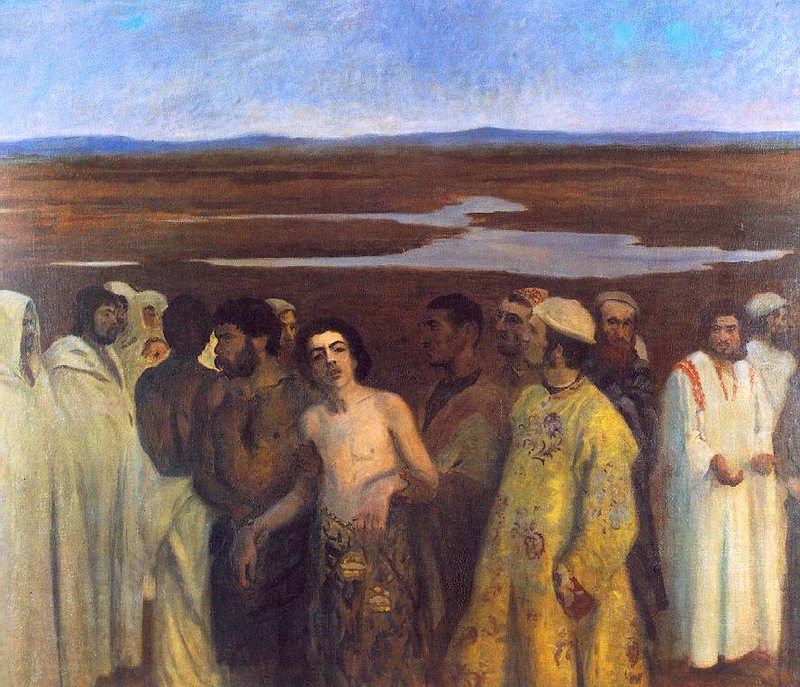 You would think that after surviving an all-night wrestling match and receiving a new name, “Israel,” and then being forgiven by Esau for stealing his blessing and birthright, that Jacob would have wised up. But, I have yet to see the sun set on a day free of my own sin, so I am not sure why I expect this of Israel. He is a lousy dad. Joseph is son #11, but he is the oldest of Israel’s beloved wife, Rachel, making him the obvious favorite. Once again, the younger is preferred over the oldest who is supposed to be the recipient of the father’s favor. Lest we forget God is always working through us flawed and limited human beings, family drama ensues.

Israel gives Joseph a fancy coat that no one else gets. Joseph seems to enjoy flaunting his favoritism—he wears his fancy coat when he goes out to check on his brothers, whom he snitches on, to boot. We can understand why the older brothers are fed up with this kid-brother Joseph; he is more than just annoying. If Joseph continues to give bad reports about them to their father, it could upend the inheritance which rightfully belongs to the oldest, Reuben. The other brothers depend on Reuben’s goodwill to share in their father’s wealth. Joseph could mess up the future for all of them—they want what is rightfully theirs.

To make matters worse, Joseph has been sharing elaborate dreams about all of them. The first involved sheaves of wheat: Joseph’s sheaf rose up, and the brothers’ sheaves bowed down to Joseph’s. Exactly what the brothers feared. Joseph would get the goods, and they would be left beggars. The second dream was even worse. Eleven stars, symbolizing the brothers, and the sun and the moon, representing his father and mother, were all bowing down to Joseph. The brothers are incensed—they will not be bowing down to anyone, least of all this high-falutin, dreamin’ nark of a baby brother.

We can understand, even identify with their anger, frustration and feeling that their livelihood and well-being are threatened. But the bonds of family and brotherhood are also strong. In this ancient, agrarian kinship society, family bonds are everything. Their lives are woven together from birth to death, and they owe complete fidelity to their father’s desires. They have reached a conflict point—where culture, morality, and loyalty clash with pain, jealousy and fear, providing an opportunity for brokenness and sin to take hold.
The brothers “conspire” to kill him. The Hebrew word for “conspire” uses a rare verb form that is both reflexive and causative at the same time. A better translation would be, “they caused deceit to themselves to kill him.” Is that not the very pernicious nature of human brokenness and sin? We deceive ourselves about what is right and moral, we justify and make excuses for actions based on our pain, the injustice we have suffered, or the fear we must avoid at all costs. And the unthinkable becomes thinkable—even necessary, even justifiable, even right. The brothers deceive themselves that it is better to betray loyalty to their family, harm their brother, lie to their father, and bring guilt into their own hearts, rather than deal constructively with their feelings of fear, anger, and jealousy. They do not just make a plan to get rid of Joseph—they have to lie to themselves and each other, in order to choose fear over loyalty, jealousy over morality, and pain over family.

This understanding of sin is reiterated in 1 John, chapter 1 which we often use an introduction to our confession: "If we say that we have no sin, we deceive ourselves, and the truth is not in us. If we confess our sins, God, who is faithful and just will forgive us our sins and cleanse us from all unrighteousness." We may feel a little better that Reuben and Judah come up with less drastic measures of shame and deprivation by stripping him of his robe and dropping him in a well, and then profiteering by selling him to Ishmaelites on their way to Egypt. The brothers may have opted for an extended death sentence rather than an immediate one, but no brother is exempt from committing evil in this text. They violated a core value of ancient family life and covenant law, valuing profit over kinship. They sacrificed another human life to preserve their own privilege, status and assets.

So what might God want us to take away from this sordid tale of bad parenting, flaunting and snitching, near-fratricide and the self-deception of human sin?
1. Broaden your circle of conversation and get new perspectives. The brothers only spoke to each other which reinforced their negative emotions, strengthened their sense of injustice, and increased the likelihood of deceiving themselves that sinful action was justified. When we live in fear and we do not engage in conversation that gets us outside our own version of the story, we sacrifice others to meet our own needs. Ask any person of color you know to tell you their stories of being someone else’s sacrificial lamb to maintain privilege. How are we engaging in patterns of self-deception that maintain privilege and resources at the expense of others? Broaden your conversation partners and find out, asking God to open your mind and transform your heart.

2. Do the work to heal your emotional wounds. Hurting people hurt people. Instead of resolving their emotional pain, the brothers compounded fear and jealousy with guilt. What would have happened if the brothers would have spoken honestly to Joseph and to their father first? Or included their mothers in a family conversation that aired out anger, jealousy, and curbed Joseph’s flagrant behavior? Feelings unexpressed come out some other way—often painfully for us or others. Whether or not personal conversations are possible, we can participate with God in healing our emotional wounds through counseling, prayer, and spiritual direction. I am here to you assist you with this healing or recommend someone who can. I regularly see a counselor and a spiritual director, so I do not, as much as possible, hurt you or my family with my own unresolved issues.

3. God always has a bigger dream at work. Joseph’s dreams of him ruling over his family were not the fantasies of egotist, but they were messages from God that would ultimately save Joseph’s life, and that of his entire family later in Egypt. I am sure life did not feel that way to Joseph on the caravan to Egypt. Despite the appearance of present circumstances, this story calls us to trust that God’s divine purpose will somehow be fulfilled. The dreams and plans of God cannot be thwarted by human machinations nor undone by human sin. God has a dream for you and your life that is being fulfilled right now. God has a dream for St. Luke’s and for our mission, which is actually growing right now—as more people have access to worship on-line and as we start a Community Breakfast! Our first one last Saturday served 63 burritos! Trust that God’s dream is at work despite any appearance to the contrary.

Israel’s gift to us is not that his family learns to live without sin, but that we learn from their mistakes and deepen our trust that God’s dream is at work, even in the midst of our present circumstances.

Image: Ferenczy, Károly, 1862-1917. Joseph Sold into Slavery by his Brothers, from Art in the Christian Tradition, a project of the Vanderbilt Divinity Library, Nashville, TN. http://diglib.library.vanderbilt.edu/act-imagelink.pl?RC=55913.