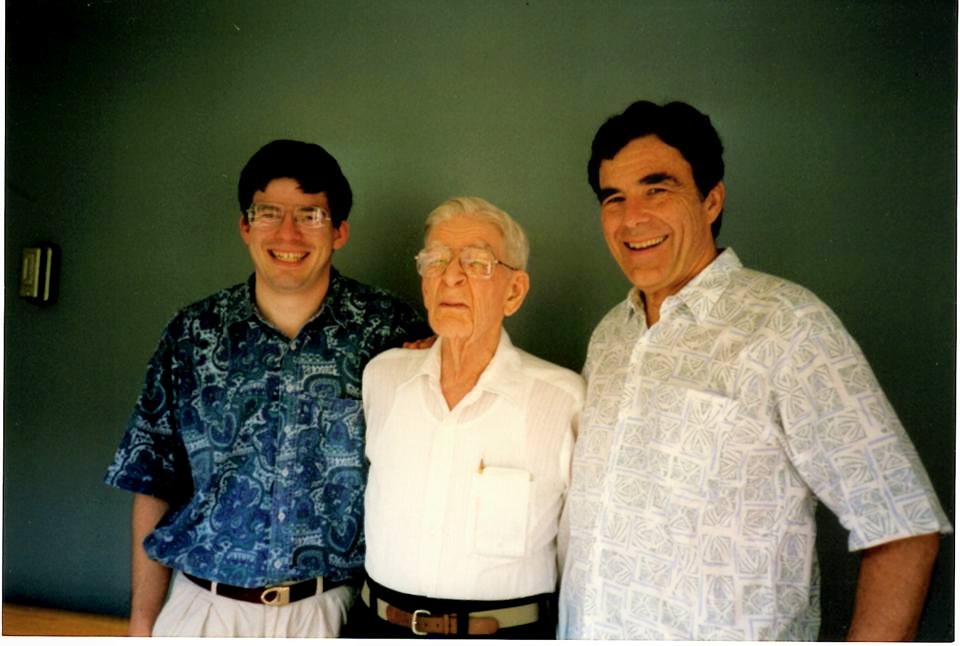 Message for Transfiguration Sunday on Matthew 17:1-9 for February 23, 2020 at St. Luke's Lutheran Church in Richardson, Texas

Today I am going to tell you a family story. If you have heard my husband Dan preach here, you may remember that he is a 6th generation Presbyterian pastor, which has afforded us a lot of stories from the ancestors who came before him. One of my favorite family stories comes from his grandfather and relates to our Gospel story of Jesus on the mount of Transfiguration with the miraculous appearance of Moses and Elijah.

Grandfather was 91—he was already a hard guy to talk with and his advanced age didn’t make it easier. Grandfather was brilliant—in addition to his Divinity degree from Princeton seminary, he also had Master degree in Semitic languages, so he knew Hebrew, Arabic and Aramaic when he studied the biblical text. He was always working things out in his head, but he was not very good at letting people get to know him. Grandfather was more of a brooding introvert—somewhat of a tortured soul who could write and preach, direct programs and explicate mission, but did not let people in and know him very well. This was more difficult when he compared himself to his brother, also a minister (I know none of you have ever experienced sibling rivalry!), who was an extrovert, and a “darling” of the pulpit and the national church, where he held a very public position.

During Christmas break of his second year of seminary, Dan’s great Aunt Bertha died, and Dan went to Washington DC for the funeral. He and great Aunt Bertha shared a birthday, so they had a special connection. Dan actually missed the service because of a snowstorm but got to the house later and spent the rest of the weekend with family. After lunch on Sunday afternoon before he had to leave, Grandfather cornered him in the house and started talking with him about some of his experiences in ministry.

Now Dan had never had a significant conversation with Grandfather in his life –none of the grandkids had. It was as if Grandfather suddenly realized his grandson was going into the family business and he was 91 and may never have a chance to tell him anything ever again. And he suddenly decided to press the “download” button, like on a computer.

Grandfather shared some of his experiences, some of his struggles in ministry—basically his biography in the church—what he did in parish ministry, some things about being the Director of Foreign Missions and living in the Philippines. And after sharing some of these experiences, Grandfather then turned the story of the Transfiguration.

And he shared how he puzzled over this text all of his life—how it made no sense to him. Jesus is Transfigured before the disciples into this image of the resurrection before he goes down into Jerusalem to face the cross, and who shows up by his side in this moment of the fullness of God’s glory? Moses and Elijah.

Moses makes sense—he freed the Israelites from slavery in Egypt and led them through the wilderness. Moses received the 10 Commandments on Mt. Sinai and instructed them in the Law. He had intimate relationship with God—going up on a mountain to talk with God and understand God’s purpose and plan. Moses brought them to the edge of the Promised Land and gave them his final instructions in the book of Deuteronomy—everything they would need to moved forward.

But why Elijah? Why is Elijah on the mount of Transfiguration with Moses giving Jesus, and with him, Peter, James and John the spiritual vision and strength they need to face the cross? There were so many other leaders in the Hebrew Scriptures that would have made more sense. If we had Mt. Rushmore of the faith, Elijah might be there, but he would be the Teddy Roosevelt of the faces.

• Why not Solomon who built the great Temple and asked for the gift of wisdom?

• Wouldn’t it make more sense to have King David? He not only wrote the poetry, psalms and hymns of faith, but he was their most significant king. David brought Israel into national prominence—Israel became a powerhouse nation during David’s reign.

• Or if it had to be prophet, why not Isaiah or Jeremiah—at least they have a whole book of Scripture named for them.Grandfather puzzled over this text in his old age and had struggled to come to an insight about the meaning under the meaning. Somehow, the presence of Elijah on the mount of Transfiguration was the key to unlocking the passage for him if he could just figure it out.

Finally, as he reflected back on his life and ministry, the answer he had been seeking came to him as a gift of revelation.

Moses, on the one side of Jesus, responded to God’s call by saying, “no—I am not worthy—I am not skilled enough—I am slow of speech and tongue—I can’t do it—I cannot be or do what you want or what you think I can do. Today we would call that low self-esteem, self-negation, or even “worm theology.” This can come from verses like Psalm 22:6 which says, “I am worm and no human,” which the Reformers like Luther and Calvin emphasized contributing to “Lutheran guilt.”

Elijah, on the other side of Jesus, had the opposite problem. He had a contest with 450 prophets of Baal to see whose god would rain down fire on their sacrifice—and of course, Elijah won. But after this, instead of giving praise to God, Elijah says, “I am the only one left. If it weren’t for me, no one would praise you, God; no one would get it right, no one would be faithful to you. I am the only one. Elijah was full of pride, hubris, and a really big head—thinking that God can’t do anything without him—that it’s all up to him and him alone.

For Jesus to do what God calls him to, he needs to walk with middle path between these two ways of following God’s call. He cannot walk all the way over with Moses telling God he cannot do it and he’s not worthy and he does not have it what it takes, because God will make him able.

And he cannot be over here with Elijah saying it’s all about me, I am doing this alone, I am the only one, and I am the Savior of the world—because he’s not getting through the cross with God holding him fast.

The disciples who follow this Jesus—are also called to walk with middle path—confident that yes, we are worthy to serve and be called by God AND humble enough to know that God has greater plans, and more people, and more ways to accomplish salvation beyond us than we can possibly imagine.

So, you are not a worm and you are not God’s greatest and only gift to the church. Discipleship walking down the mount of Transfiguration is the middle path of confident humility.

Then this 91-year old man who had such a hard time sharing anything at all, looked at Dan and with tears in his eyes said, “but God uses people even at the extremes.”

And that, for grandfather, was accepting grace near the end of his life—because there were times when he felt so unworthy, he would brood with Moses; and there were other times when he had a towering ego with Elijah, when no one in the church could get it right but him—and yet, as he looked back on his life, God used him anyway.

So, as we seek to follow Jesus in traveling the middle path with confident humility—we can trust with Moses, Elijah and Grandfather, that faithfulness is not about doing it perfectly but about being available for God to use us, flaws and all.