The King Who Suffers 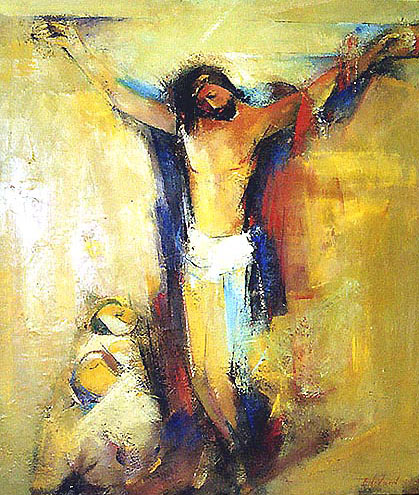 It’s hard to see Jesus as King when he is hanging on the cross.

That was the very point of crucifixion in the first century—a brutal form of execution used to cause shame and fear. Our passage from Luke has the officials naming Jesus as the "King of the Jews" three times. It is complete mockery—political theater on the part of the powerful to parade their might and to warn those who would dare to try to challenge their authority: “Your Jesus may be able to heal lepers or calm storms or feed thousands, but here is your king, helpless and dying on a cross. Rome wins and your king loses badly—stripped, bleeding and dying. Beware anyone who wants to follow him.”

Yet, here we are 2,000 years later, celebrating the last Sunday of the Church year before we turn toward Advent. This Sunday is always called, “Christ the King Sunday,” where we celebrate Jesus’s Lordship not only over this cross, but over the earthly powers that put him there, over the devil, the whole creation, the universe and even over death itself.

But still, we do not have a Gospel story of Jesus enthroned on high, we have this, a Good Friday story; one we would rather save for next April. It would be nice today in the midst of war and turmoil around the world, political strife in our own country, ethnic and political violence, human suffering in so many places and communities near and far, to hear about Jesus as victorious King of all, Ruler of the universe, but instead, we are back at the cross, with a suffering, seemingly powerless king, not a conquering, all-powerful one.

It’s hard to see Jesus as King, as Ruler of all, Lord of our life, when he is hanging on the cross.

I remember being so angry at this suffering-Jesus when I was enduring the worst physical trauma of my life. I looked back at some of my writing from eleven years ago and I found this letter to God:

I’m not sure I can believe in you or talk with you or trust you or put my life in your hands. My suffering has been terrible say nothing of that of the world. What have you to say for yourself? I say you’re a terrible God. I am not sure what purpose you serve if it is not to end suffering. Not to answer, “why?” Not to put an end to evil. Not to stand up and say something for yourself, make yourself known, unequivocally, without a doubt or question, that you reign supreme and have the final say. Where is Jesus’ power today? Where is his victory over suffering? His suffering has not ended my suffering nor that of the world. … I don’t find comfort in hearing that Jesus knows this suffering, that he suffers with me. I want him to take it away. I want it to end. I want the suffering of the world to end. I want to know what you are going to do about it and when.

There are other things I said in this letter to God that I cannot say in the pulpit, but I think Jesus and I have a good relationship now, because I never held back—whatever I felt—I let him have it. He was not the God I wanted in suffering because there was never a quick fix or an easy answer or magic healing.

So, what kind of King is this that God sent in Jesus, who hangs on the cross, and accepts pain and innocent death, who does not end suffering, but instead, chooses to enter it?

It is the kind of king who recognizes that the greatest power that exists in the universe is not power over others, but power with and through others, a power which brings life, and this power has only one name: love.

For isn’t it the power of love which created the universe to begin with? God could have remained an unfathomable ball of energy and light nearly 13.8 billion years, but instead, out of love and a desire for loving relationship, God’s whole being was broken open, exploding outward into trillions of galaxies with billions of stars—a self-sacrificing birth creating the universe.

And out of that vast universe of possibilities, God created us—each one of recycled stardust and holy breath, filling us with the Spirit of life and calling us into a love relationship.

And this love wanted to be in even closer to humanity, so the vast God of the universe pressed down into human DNA and became the embodiment of love in the person of Jesus, so we could experience how true love acts and speaks, responds and lives.

And when those with power were threatened and tried to kill the King of God’s reign on the cross, Love chose to absorb violence, and instead of perpetuating the cycle, and Love broke it with forgiveness. “Forgive them Father, for they do not know what they are doing—they do not yet know love.”

Love chose to turn the other cheek and not return evil for evil, but rather to overcome evil with good.

Instead of making a power-play, Love chose to suffer for us all the way through hell, because Love is the only power that can transform hell into heaven, and suffering into redemption.

Love chose to show the folly of “power over” others with a kingdom that has outlasted by 1500 years, the empire that tried to kill him.

For three days later love transformed Jesus from death into life—showing us that suffering is not the worst of what we experience in this life—it is a lack of love, it is isolation, apathy, loneliness, hatred, sin, disconnection—anything that separates us from God and from trusting that Love hangs with us no matter what.

And that’s what I have learned through the physical and other kinds of suffering in my life—that when I was only looking for God in the end of suffering in or in the answers that I wanted, then I almost missed the many ways that Love was showing up for me and keeping me connected: in the friend who took me to chemo, in the family who supported me, in the meals delivered, in the countless prayers, in the handmade prayer shawls and the quilt that hangs in my office, in the letters and cards, in the visits—I was covered in Love, which is to say, I was living within the kingdom of Jesus.

As John V. Taylor, Bishop of Winchester, England said, “The basic power beneath things is a weakness powerful only in the way that love is powerful—at the end of a long process of endurance, disappointment and vulnerability. In short, God’s only power is love.”

Colossians says it this way: Through this love, “God has rescued us from the power of darkness and transferred us into the kingdom of his beloved Son… For in him all the fullness of God was pleased to dwell, and through him God was pleased to reconcile to himself all things, whether on earth or in heaven, by making peace through the blood of his cross.”

Because we are created and saved and transformed in love, which is always present, God desires to work through us and with us to bring greater love, and embody deeper love for the world. That’s the true meaning and miracle of the Incarnation. Not just that God became human in Jesus, but that Jesus becomes human again and again and again through each of us, as his body in the world, loving people who are suffering, and transforming evil--not with retaliation, but with good.

We see the kind of love Christ our King calls us to, embodied in the life of Mahatma Gandhi, who read a portion of the Sermon on the Mount, Matthew 5-7, every morning and every night for 40 years because he grasped the reign of God in Jesus’ Law of Love--that love is the only power strong enough to overcome evil. He challenged and rejected Western Christian theologians inability to take seriously, the fullness of Jesus’s message of love. Gandhi understood that Jesus’s Kingship was a reign of non-violent, non-retaliation, non-resistance to evil dedicated to transforming it through the multiplied power of goodness through love. Martin Luther King Jr. called Gandhi, a Hindu, “the greatest Christian of modern times.”

Is it still hard to see Jesus our King hanging on cross? Our hope today is to be like the criminal hanging next to Jesus—to see in his suffering, the advent of the most powerful kingdom in the universe, and to beg for entry into this reign of love that transforms all.

On Christ the King Sunday, our Lord who hangs on the cross, shows us that the fullness of his reign of love, must go far beyond our personal behavior and our private relationships. Indeed, his love has the power to change the world, to bring peace, to stop violence, and to have radical social, communal, and even national and global implications.

When we witness to this reign of Christ, we join with believers and saints who truly see the Kingdom of Love breaking into the world in Jesus Christ, and we are ready to join God’s loving transformation of the whole world.