Sólo Uno Volvió: Only One Turned Back 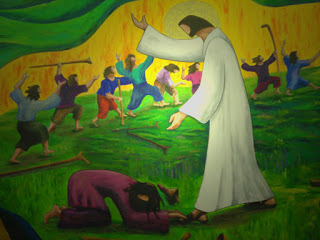 Message developed together with Pr. Dan Anderson-Little using a poem by Magdalena Garcia for Pentecost 18 on Luke 17:11-19 given on October 13, 2019 at St. Luke's Lutheran Church in Richardson, Texas

We are so familiar with Jesus’ healing of the ten lepers and the one who returned to give thanks, we need a creative way to hear this anew. My husband, Dan has a colleague who wrote a poem in Spanish about this passage and I will us the English translation and offer a reflection after each stanza of the poem as a way to enter this text differently. The poem is called, “Sólo uno volvió” / “Only one turned back”

Only one turned back
and praised God for the healing action
instead of remaining silent
or going indifferently on his way.

Only one turned back…why only one? When Jesus heals you, don’t you want to praise God and thank Jesus for your new life?

But sometimes we don’t turn back. If we live with a specific hurt or an enduring pain or a debilitating disease; if we lived in the shadows because of who we are, or what has happened to us, or because we have become accustomed to guilt or shame, or because of our race or ethnicity or culture, we learn to live in fear. That is certainly true for the lepers. It was a disease that not only disfigured the body but isolated the soul—it kept one from participating in family, community, and society. After a while, you learn to sit on the sidelines, to remain silent, to swallow your pain.

But the one who turned back recognized a new chance at life in all its fullness. He let a sliver of joy begin to replace his fear. He felt joy because he could embrace his family and eat with his friends. And so he turned back, he raised his voice, refusing to be silent, refusing to be sidelined, and he praised God.

Only one turned back
and thanked Jesus for his intervention
instead of taking the credit
or attributing the deed to someone else.

Only one turned back…why only one? When Jesus heals you, you know it was him who did it, don’t you, blessed by God, anointed with God’s power?

But sometimes we don’t give thanks for healing—because when we give thanks, it makes us vulnerable as we put ourselves in another person’s debt. Thanking another means admitting we are dependent on them, that we can’t live life by ourselves, we can’t make it alone, and on our own terms. And we must let go of control. That was certainly true for the lepers. Their disease had robbed them of all control—they always lived at the mercy of others. Finally, now that was gone, they could determine their own lives, they could set their own course. They did not thank Jesus because that would mean giving control back to someone else—they were made new and they were not going back—they were not even looking back at the one who made it all possible.

But the one who turned back knew that his life was forever connected to Jesus. For him, it wasn’t giving up control, but it was finally having a partner, a power, a God, who would bear his burdens and share all of life with him. With Jesus he had a relationship that saw and knew all of him, that made all of him possible, all of him okay, all of him welcome.

Only one turned back
and undertook his true liberation
instead of remaining enslaved
or perpetuating existing barriers.

Only one turned back…why only one? When you live in a prison that keeps you from reaching your true potential, don’t you want to taste the sweetness of freedom?

But sometimes liberation is too scary for us, too open, too possible. We grow so accustomed to our chains that we feel naked without them. We long for freedom, but when it comes, we don’t know what to do or how to act. That was certainly true for the lepers. They wanted liberation from leprosy so badly. When they saw Jesus they called out, “Jesus, Master, have mercy on us!” But when he had mercy on them and set them free, freedom was terrifying, a conundrum, a burden. In the past, leprosy determined how they would live, they knew the rules, and the limits and the expectations. Now it was up to them. And they were scared. What are the boundaries? Who are they now?

But the one who turned back knew that Jesus had removed not only the barrier of leprosy, but the barriers he had constructed in his mind. For him, his healing was invitation to live a new life—the life that God had intended for him. It was a life with the parameters of praise and gratitude and the love of a life-giving God—those were new boundaries, worthy of exploration.

Only one turned back
and testified of his transformation
instead of professing xenophobia
or blaming the victims.

But transformation is hard work. It can be hard for us to let go of the anger and resentment that have been our companions for so long. We are victims of so much wrong and if we let it go, how will “they” pay—those who treated us so poorly? Then, we sometimes wonder why others who have not yet tasted transformation are still stuck in their old patterns. We so easily turn our anger toward others who have not progressed as we have—those easy to label and reject. We see it today in our country—a nation of immigrants turning our backs on immigrants who come to escape persecution or find opportunity denied them in their own country.

Only one turned back
because only one was cured
from the debilitating leprosy
of isolation and discrimination.

Only one turned back…why only one? When Jesus’ healing power touches us, is it just your body that is made well? Isn’t your whole life that is restored—your spirit, your mind, our soul, and your relationships?

But curing and healing are not always the same thing.

All ten of the lepers were cured of their leprosy. The disease that ate away at their bodies was removed and they would always live free of that scourge. They were physically healed, freed to return to their families and communities. But what about their soul? What about their relationship with the God who created them and sent Jesus to restore and save them? Did they walk away thinking that a relationship with God didn’t matter? That their good fortune was due to hard work, loud shouting, and good luck, so they could go back to old ways that isolate themselves and shut out others in their new life despite the miracle they experienced?

We can be physically healthy and spiritually bankrupt.

But the one who turned back knew that Jesus had not just cured his body, but had healed his whole being. And he knew that his own wholeness was not complete until he praised God and thanked Jesus. With his gratitude, he completed the circle of relationship and love between them and began to let this relationship with Jesus Christ save his soul as well as his body. The one who returned was not just cured of a disease, his gratitude and relationship with Jesus made him whole—experiencing salvation right then, in body, mind and spirit.

What’s the difference between the nine and the one, between curing and healing, between physical restoration and whole-soul salvation? Returning for a relationship with God in Jesus Christ—the only one true desire of God’s heart for you.