Playing Mad Libs with the Parable of The Good Samaritan 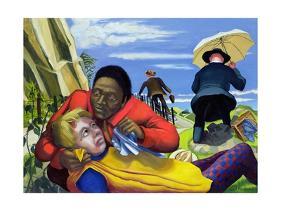 Listen again to a story that Jesus tells:

A man was hiking along Preston Road to get from Dallas to Plano and he fell into the hands of robbers, who stripped him, beat him, and went away, leaving him half dead.

Now by chance The Pope was going down the road on the way to bless people; and when he saw him, he passed by on the other side.

So likewise, Dalai Lama on his way to pray when he came to the place and saw him, passed by on the other side.

But a Muslim terrorist, while traveling came near him; and when he saw him, he was moved with pity. He went to him and bandaged his wounds, having poured oil and wine on them.

Then he put him in his own Chevy SUV, brought him to the Motel 6, where he was staying and took care of him.

The next day, he took out $150 and gave it to the front desk clerk and said, ‘Take care of him, and when I come back, I will repay you whatever more you spend.’

Which of these three, do you think, was neighbor to the man who fell into the hands of the robbers?” The lawyer responded, “the one who showed him mercy.” Jesus said to him, “Go and do likewise.”

How do you feel when you hear the story this way?

What is shocking when you hear the story this way?

The religious people do not show compassion—they follow their religion so closely, it has become about doing religion right, rather than doing the right thing.

The “enemy” becomes the role model. The “Good Samaritan” is not someone who does a simple kind deed, but our enemy--someone whom we fear, who threatens our life, our sense of well-being, our security—who does a kind and just deed.

The lawyer cannot even say, “the Samaritan” but “'the one' who showed him mercy." How can we build a relationship with those we fear or hate if we cannot even say their name or nationality?

Sometimes that human being in the ditch is us

God has come near to us in Jesus the Christ. Our salvation comes from an enemy of the state, who was killed like a criminal but who rose from the dead. Like the Good Samaritan, Jesus promises to come back and pay our final debt— so that all our sin is forgiven, all our wounds healed, and all our debts paid. We hear in this parable, a veiled autobiography of Jesus who comes near to all of us to save us and promises to return to make sure everything is set right, and all is healed.

Until he returns, Jesus calls us not to fear the "other" as an enemy, but to see him, the risen Christ.