The Supreme Court Hearings, the Corrupting Power of Sin, Jesus's Victory over Hell, and the Healing Power of Resurrection Community 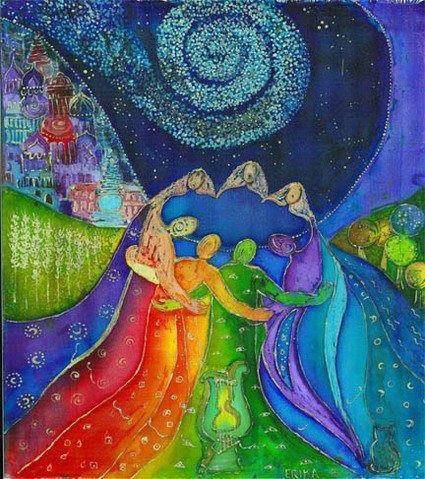 Because this week's news has triggered many of survivors of assualt and abuse I offered this "trigger warning" after the Children's Message and before the Gospel reading:

Before we hear the Gospel lesson and sermon, I want to let you know I’ll be talking about what’s happened this week with the Supreme Court nomination. Given our Gospel reading today, we can’t avoid it. I will also share some of my own experience with misconduct. I want you to know ahead of time as a trigger warning or if, for whatever reason, it’s not something you or your child can hear today. You can slip out during the Gospel Alleluia, listen from the Gathering Area and return for Communion, or read the sermon on-line later. As always, I am available to listen to whatever issues this week’s events or today’s message brings up for you.

In the Christine Blasey Ford/Brett Kavanaugh hearing this past week, we’ve certainly had a powerful reminder of the corrupting power of sin. Someone, Dr. Ford is certain that is was Judge Kavanaugh, sexually assaulted her 35 years ago. That horrific event still resonates and impacts her life. Judge Kavanaugh is appalled that he is being accused of this act. There is anger and pain and acrimony on every side. But what strikes me is that regardless of what happened and who did what, we can see the power sin has, not only in a moment in time, but for years and years to follow.

Jesus knew how severe the effects of sin can be—and to make sure his disciples and we understand this, he used extreme language and extreme symbols in our passage from the 9th chapter of Mark’s Gospel.

First, Jesus is holding a child—it doesn’t say this in our passage, but in the verses just preceding which we heard last week, Jesus took a child and put her among the disciples admonishing them that to receive a child is to receive him and indeed, to receive God, giving children an almost sacramental status. Scripture gives no indication that Jesus put the child down, so as we hear today’s verses, we do so imagining that Jesus speaks with a toddler in his lap.

The second extreme image Jesus uses in this teaching is the word, “hell.” The Greek word here is “Gehenna” or "Valley of Hinomm" in Hebrew. Gehenna is a small valley southwest of ancient Jerusalem where two kings of Judah, Ahaz and Manasseh, sacrificed their children to the Canaanite God, Moloch using fire. Such practice was forbidden in Leviticus, condemned by the prophet Jeremiah, and many believe that the story of Abraham preparing to sacrifice his son Isaac was recorded as a polemic against child sacrifice in the ancient world. Leading up to Jesus’ time, the valley of Gehenna could have become a refuse dump with smoldering fires, explaining its later association with hell and the place that the wicked go. In the Gospels, Jesus uses this term “Gehenna” or Hell, to refer to life that is opposite from the kingdom of God, a life that is separated from God and against God’s will, as in child sacrifice.

Jesus’ first century audience would have immediately understood his vivid messages about Gehenna as he held a child, warning others against sin, and against being cast into the valley where some of Judah’s kings separated themselves from God, God’s will and God’s kingdom. This also underscores why, later in Mark 10, Jesus tells us we must become like a chld in order to enter the kingdom of God--their natural trust and belief is sacred, is a model for the rest of us, and constitutes egregious sin to break their trust in God.

Finally, Jesus drives home the corrupting power of sin and human brokenness by using violent and disturbing language about cutting off one’s hand or foot or cutting out one’s eye if they cause us to sin. I remember a psychologist I worked with at a state psychiatric hospital during seminary who commented that she really wished Jesus had not said this, because those who are not in their right mind, take these words literally.

Jesus does not intend us to self-mutilate as penance for sin; he uses hyperbole or extreme exaggeration to make clear an essential teaching about the kingdom of God and what it means to follow him. Human brokenness and sin are so corrupting and damaging, we need to take great pains to avoid hurting others, especially children and others who are the most vulnerable in society.

Jesus uses this graphic and disturbing imagery to say in no uncertain terms that choices have consequences, that our behaviors lead to outcomes and we need to pay attention to the damage to others those outcomes might create. Our sinful choices and behaviors cause others to suffer. And other people’s sin and brokenness causes us to suffer. This is the shadow side of free will that we don't talk about much. We suffer from others’ sin and others suffer from our sin. That’s hell. That’s an experience of separation from God. We don’t need to wait until after death to experience hell, we do so right now in anything that separates us from God’s love. Jesus does not want us to miss the seriousness of this aspect of human life.

This is what we’ve seen played out on the national stage between Dr. Blasey Ford and Judge Kavanaugh. No matter what your views are politically, we cannot come to worship today as Christians and avoid the truth that we suffer from the consequences of each other’s sin, and those consequences can be deep and long-lasting for everyone.

It’s only since the recent #Metoo movement began that I have begun to understand the impact of some of my own experiences. I frequently experienced sexual harassment in seminary, on internship and in my first call, especially when I was the first woman clergy many had encountered. I have never told this story publicly, but the most egregious instance took place on internship when I naively invited a colleague over for dinner. He was a married pastor with a child whose family hadn’t moved to the area yet, and I was a wide-eyed seminarian, anxious to learn from someone older and wiser than me. I had supper and learning on my mind, but he had other ideas. First he tried to get me to smoke pot which I declined, and then he propositioned me physically and explicitly. Fortunately, it did not turn into assault and he left when I asked him to.

I reported him to my supervisor the very next morning, expecting that he would be severely reprimanded for this grotesque breach of trust and professional conduct. Later I was told that I had “misunderstood his message.” The man took off his shirt, laid on my bed, and asked me to touch him; I didn’t misunderstand the message, but that was the end of it. For the rest of my internship, I was not able to make any visits to our members at the nursing home where he was a chaplain. I didn’t tell anyone else, except eventually my husband, because I learned that to do so meant I would be dismissed and belittled.

It wasn’t until this year that I realized that one of the consequences of this experience and the many other instances of sexual harassment by male clergy (whcih are too numerous to detail this morning), was that I have only pursued solo calls—I never allowed myself to try team ministry because I didn’t trust any male senior pastor to behave, or to believe me if I reported misconduct. If that wasn’t enough, just last June in spiritual direction, I uncovered that one of my struggles with losing weight and keeping it off is rooted in a decades-old fear that if I do, I will become a target for more sexual harassment. Over and over in my ministry, I have seen that extra weight and even obesity is often a form of protection for survivors of abuse, but I never once thought to apply it to myself.

I tell this story to remind myself that others’ sins who have had an impact in my life, do not define who I am. I also tell this in hope of giving courage to others here to share their story—if not with me, then with someone you trust. Sometimes we need to witness the story of someone we know in order to have the courage to come forward, and if my experience helps one person tell their story, then it’s worth both our discomfort (and believe me, I am uncomfortable) and our time.

So where does Jesus call us from here? First, we need to give permission and courage for survivors of any abuse, male and female, to tell their story, whether it happened 5 days ago, five years ago, 35 years ago or 85 years ago—because the effects of sin remain. I know of all kinds of survivors, including male survivors of spouse abuse. As people who follow Jesus, we are called to create a safe place where incidents are not minimized but rather, taken seriously so that healing and recovery can begin. When we can offer listening and healing as part of our ministry of following Jesus, survivors do not end up dealing with recovered memories decades after the fact.

Second, we need to challenge narrow and limiting concepts of what is masculine and feminine, boxing men out of experiencing and expressing the whole range of human emotions and criticizing and shaming women who express assertive leadership. This is a gift of the LGBTQ community to the rest of us—helping us break out of binary, "either—or" thinking and accept that each of us can be a whole complex of feminine and masculine characteristics. We need to teach about power dynamics, appropriate boundaries and learn how to identify and protect our own boundaries. (Perhaps this also helps the Council understand why I have a statement at the top of every pastor's about appropriate boundaries, and why we need to get windows installed on all of the office doors).

Most importantly, God calls us to live and proclaim the Gospel that sin does not define us or anyone else. Jesus’s graphic language reminds us that it’s not enough for us to try to personally avoid sin, although that’s a start. Following Jesus and living in the kingdom of God calls us to be instruments of healing and hope, creating communities where God’s children know that they are not defined by sin or what has been done to them, but by what God has done for them in Jesus Christ.

Jesus’s victory over sin, death, the devil, and Gehenna—or any hell that threatens to separate us from God, has been defeated on the cross and raised victorious with Christ. God calls us to live out this good news in a community of healing, forgiveness and hope—where we are defined by what Jesus has done for us—offering us grace and the power of resurrection in all of life. That's the kind of community James describes and calls us to live in and pray for, as in verse 16, "Therefore, confess your sins to one another and pray for the one another that you may be healed."

In every situation, Jesus calls us into being as a community of resurrection—a community of hearing the stories, healing the pain, and sharing the hope—that’s what defines us, and that’s a church where spirits come alive!

Image: I have not been able to find the artist for credit/permission and have only found it on the linked site.