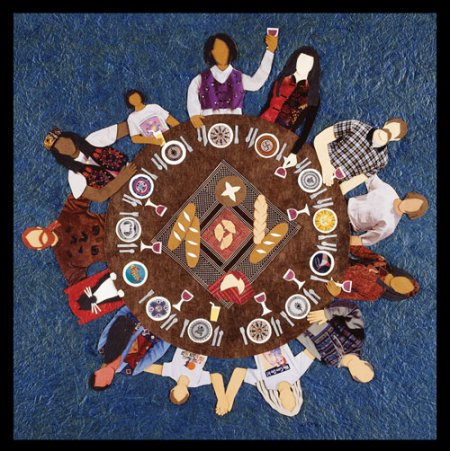 I didn’t look at the Gospel reading when I picked this Sunday to receive new members. It’s just the best day that worked on the calendar. Had I looked at our passage from Mark and shared with our new members that this is what they’re getting into, I would have expected them to say, “no way!” or as even Christians in Texas say, “hell no!”

That list doesn’t have a lot to recommend being a follower of Jesus—being killed, being last, being servant all, and making children and other vulnerable of society the most important.

The disciples are afraid and confused. If Jesus continued down this path, what would happen to the them? Would they also suffer and die? Would they also be expected to hang out with the lowest of the low and the worst of the worse?

In their fear and confusion, the disciples did what most of us do when our sense of security and identity is threatened—they jockeyed for position and power. Who was the greatest among them? Who was more important? James and John, the “sons of thunder?" Or perhaps Peter and Andrew—all strong-armed fishermen. Fighting with each other about who would dominate in their discipleship was more comfortable than dealing with the reality of what kind of Messiah Jesus really was.

This reaction to assert dominance is almost like a human reflex—when we our self-interest is threatened, we try to assert power over others or over the situation with whatever we’ve got—status, wealth, skin color, pedigree, resources, smarts, muscle, education, or communal clout.

We see this pattern repeat itself across cultures and continents throughout history: from personal relationships based on the dominance of one over the other, to whole societies that support systems of violence to keep one group on top: apartheid, slavery, the Trail of Tears, the Holocaust, the Rwandan genocide, the white supremacy movement, and the list goes on. Jesus knows that personal and social dominance has destructive and deadly consequences for those on the bottom. Our passage from James calls this “disorder and wickedness of every kind.”

The irony of this passage is that the disciples exhibited the very behavior Jesus was speaking against. Jesus embodied the kingdom of God as a place that renounced dominance--where everyone has an equal place at the table.
• the tax collector received forgiveness next to the pharisee;
• the woman is healed beside the man;
• the foreigner is welcomed next to the Jew,
• the poor are empowered beside the wealthy,
• the sick and outcast are embraced beside the governor,
• the lame are loved next to the king.

True greatness, Jesus says, is not to be above others, but to be least of all and servant of all. It is not to ascend the social ladder but rather descend it, taking the lowest place and reaching those society has rejected. It is not to seek the company of the powerful, but to welcome and care for the most vulnerable, such as the child that Jesus embraced and placed before his disciples.

Jesus shows that God’s love and forgiveness is completely disconnected from human values of dominance, power, wealth, status and prestige. That’s why Jesus was killed—because he threatened the dominant social position of the religious leaders who had the corner on the market for dispensing God’s goodies—a merit system of blessings according sacrifices made, offerings given, and laws followed.

Radical grace and a level social and religious playing field threatened those who need to dominate others to feel security and identity. That’s why Jesus says that the only way we can see, understand and embody God’s all-embracing love, God’s radical forgiveness, God’s open table, is if we get off our high horse and serve those we think are beneath us.

But when we are used to privilege, it’s hard to willingly give it up for the well-being of someone else, or just because Jesus asks us to. When Dan and I were first married we lived in Detroit. I had served a church there for one year and when he finished seminary, he moved there to join me and look for his first church. Not many people were interested in urban ministry, so we figured he would get a call pretty quickly.

Also, Dan has pedigree out the proverbial “wazoo.” His first ancestor landed in Massachusetts in 1640—and Nathan Hale, Lucretia Mott, Herman Melville, Gerald Ford and whole catalog of other notables decorate his extensive family tree. To top that off, he’s a 6th generation Presbyterian minister and his ancestors started or served churches in more states than I can list, his grandfather served in the Philippines and China, and his father served in the highest position of the national church, equivalent to our presiding bishop. He’s wickedly smart, has a nearly photographic memory, and is tall, dark and handsome to boot (How have I lived with this guy for 28 years?! ;) ). If anybody deserved a call to a church it was Dan Little. That conversation with the disciples about who’s the greatest? Dan had all of them beat in the dominance-game, hands down!

There was one inner-city church in Detroit that was open, and the Presbytery decided that would be a good place for him to go. They offered him the job, they agreed on salary, he signed the papers, we announced at our wedding that after 4 months of looking Dan finally had a call! We flew off to our honeymoon, so relieved that we were coming back to 2 incomes because we weren’t going to make it on my salary alone.

The problem was, the Presbytery didn’t really ask what that inner-city congregation wanted—they just acted like the dominant church structure they were used to being. As soon as we got home from our honeymoon, the presbytery office called and said, “we made a mistake, you don’t actually have job. The congregation really wants an African American pastor.”

Of course, we agreed that was important in their context; we understood the need for an African American pastor, and we didn’t have trouble with that at all. We did struggle with the fact that the presbytery didn’t have the humility to really talk with the congregation before offering Dan the job. Even more difficult was to confront our own assumptions of privilege—that Dan had a “divine right” to a job—and none was forthcoming.

He had to earn some money, so he tried to become a waiter at a very fancy restaurant, but because he had no serving experience, they made him a bus boy. His pedigree, and 4-year master’s degree didn’t matter. Both the customers and the waiters treated him like dirt, and he cringed as the waiter’s mis-pronounced the French wines, resisting the urge to correct them.

Eventually Dan became an interim pastor and became ordained, but losing that job and bussing tables was a crucial learning experience for both of us. “Whoever wants to be first must be last of all and servant of all." This was not an experience of service that Dan chose, but it has helped both of us choose service rather than domination and self-interest at other times in our life. Through this, Dan gained a necessary experience of humility, of being on a bottom rung, a willingness to learn, an awareness of his privilege, and the ability to choose against it and against his self-interest, for the sake of others.

All of this was crucial for him to serve his next call, an African American congregation on the southwest side of Kansas City, Missouri. Dan entered that setting as a student of the culture and the neighborhood, rather than marching in as the white ministry expert.

Jesus invites us with the disciples, to choose service, humility, equality, and radical grace for everyone—especially those on the margins, whom society has rejected, who live on the bottom rung, who make us uncomfortable or who seem beneath us. Following Jesus faithfully is extending his generous welcome to everyone we meet whether it’s the homeless person on the corner, a neighbor wearing a hijab, someone in the LGBTQ community, or an immigrant who speaks another language.

We can acknowledge and deal with our insecurities and fear, but not allow them to feed dominance-behavior. Rather, as followers of Jesus, God calls us to set aside whatever privilege we have —look others in the eye, and as with our children this morning, be willing to learn, humble enough to listen, interested enough to engage, and fearless enough to love. Then we are “full of mercy and good fruits,” as James says, “without a trace of partiality or hypocrisy.”

When we as the church lead our society in these kinds of behaviors in our daily lives and in our public witness, then those who operate on dominance fueled by fear and insecurity, lose their power to frighten and divide our communities. Then we can proclaim that Jesus’ loving embrace is radical enough to include even them!

That’s the Gospel that’s easy to miss when Jesus invites everyone to the table—the wealthy and the dominant aren’t replaced by the poor and outcast, they are brought together! We are brought together as a community, whose behavior is changed by a love that none of us deserve, putting us on a level playing field where even death itself has no power!

What does St. Luke’s—old and new members alike—say to that? “Hell, yes! and Amen.”