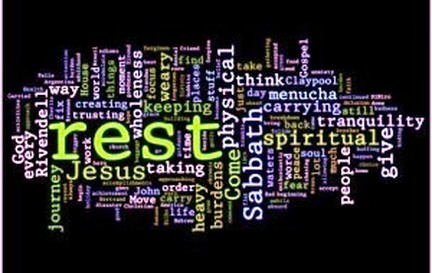 A sermon preached on Mark 2:23-3:6, Deuteronomy 5:12-15, and 2 Corinthians 4:5-12 for the 2nd Sunday after Pentecost on June 3, 2018 at St. Luke’s Lutheran Church, Richardson, Texas ~with apologies for late posting due to my last intensive class for my Certificate in Spiritual Direction!

It was the summer of 2005 and we were visiting my husband, Dan’s parents in Madison, Wisconsin. His mom, Joan, had been suffering from Alzheimer’s for about 3 years, and we went to spend time with her, to support Dan’s Dad, who the kids called, “Baba,” who was taking care of Joan at home. Baba had learned how to cook in his 70’s as well as other household and care-giving tasks he had never previously imagined as a pastor and denominational leader.

One afternoon, Leah, who was six years old at the time, looked at her grandpa asked, “Baba, why are you so mean to grandma?” (Out of the mouths of babes!). Baba’s face dropped with the realization of the truth her question revealed; an expression of resignation and sadness replaced irritation as he looked at himself in the mirror Leah gave him.

Of course, he didn’t intend to be mean to grandma, he was just exhausted, frustrated, overwhelmed, tired of repeating himself, worried about her wandering off, planning the next meal, organizing companion visits, and all the while, grieving the relationship they once shared. We have this treasure in clay jars to make it clear that this extraordinary power comes from God and does not come from us. Baba needed rest—he needed Sabbath rest, but as many caregiver’s experience, rest is hard to come by when caregiving requires nearly 24-hour vigilance.

Our Gospel reading today entails an argument about the meaning and purpose of the Sabbath and the rest it requires. The 3rd Commandment exhorts that, “you shall honor the Sabbath day and keep it holy.” The religious leaders were no doubt threatened by this upstart, wandering preacher named, Jesus, from the backwater of Galilee.

He was disrupting the community and their religious system with his healing, and teaching. I can understand the Pharisees’ suspicion. I’ve met more than one arrogant intern over the years who thinks they have this whole ministry business figured out and I think to myself, “you don’t know anything.” But I digress.

The ensuing discussion really gives us a window into a first century bible study. The Pharisees and Jesus take differing views on how to interpret an ancient text –the giving of the Ten Commandments, recorded in both Exodus 20 and Deuteronomy 5—and how live it out in their current context. Can the commandment to “Honor the Sabbath day and keep it holy” include plucking grain in a field and healing a man’s hand, or does it forbid them as work?

The answer is not quite as straightforward as it might first appear. Unlike other commandments that just give a single phrase, like, “you shall not kill,” the giving of the 3rd commandment is quite detailed which we heard in our first lesson. After describing that everyone and everything should rest on the Sabbath, Deuteronomy continues with God’s rationale:

Remember that you were a slave in the land of Egypt, and the Lord your God brought you out from there with a mighty hand and an outstretched arm; therefore the Lord your God commanded you to keep the sabbath day.

Escape from slavery in Egypt was still a fresh memory for the Israelites when the Ten Commandments were given at Mt. Sinai—they knew what it was like to work 7 days a week with no rest, no holiday, no family time, no sick leave, no worship. When they were slaves, they were not allowed to rest, so now that God liberated them, God commands them to rest from work—and not only them, but their entire household, including family, workers and animals, and the whole community, including immigrants.

God puts the very first labor law on the books--faithfulness to God does not include workaholism and perfectionism, but rather rest and renewal. In other words, God started the very first weekend!

To people recently liberated from slavery this must have sounded strange and wonderful. Instead of engaging in forced work, God invited the people of Israel into “forced grace.” This forced rest served both as a remembrance of the freedom God had won for them, and as a celebration of the goodness of life, wholeness, family, and community that God provides.

The sabbath, in all its aspects, is about freedom—a life-giving liberation from all that holds us captive, whether it’s work or sin, brokenness or addiction, pride or irritation. On the Sabbath, we rest from earning anything—and step into a moment of forced grace—a time each week of opening ourselves to simply receive the peace, wholeness, blessings, and freedom God so deeply wants to give.

The Pharisees in this discussion got caught up in following the letter of the law down to the details—you can’t pluck grain, prepare food, or heal on the Sabbath. But Jesus argues that the proper function of the Sabbath is to promote life, and to celebrate God as liberator from all that enslaves us—including following the letter of the law when there is a greater need at hand. As religious experts, the Pharisees understood this view of Sabbath, but like Baba and us, it was hard for them to stop trying to be perfect; they even tried to rest perfectly. We have this treasure in clay jars to make it clear that this extraordinary power comes from God and does not come from us.

Instead of indulging a legalistic and perfectionistic view of the command to rest, Jesus argues that plucking grain for food promotes the life that Sabbath is designed to sustain. Healing a man of a crippled hand promotes well-being, wholeness, and freedom from a life of begging—also life that Sabbath is designed to sustain. The question is not so much, “What’s the list of things you can’t do on the Sabbath?” as it is, “What is life-giving, nourishing to the body and soul, and promotes peace, rest, and well-being?” The Sabbath was made for humankind, not humankind for the Sabbath.

Although we still have a couple of Blue Laws in Texas restricting the sale of cars and alcohol on Sundays, we as a culture, are notoriously bad at Sabbath. Even though we have added Saturday to the “weekend” that God started with the 3rd Commandment, the Puritans left us with a work ethic that doesn’t quit (literally!).

When I exercised at the YMCA in St. Louis, I would use an elliptical machine that would track my miles, heartrate and calories burned. When I paused for a minute to take a sip of water, the readout on the screen would say, “climb faster.” We live in a “climb faster” culture where there’s always more to do, to attain, to earn, to buy, to accomplish. Rest feels like laziness, or that we’re giving up on our goals, or that we’re being selfish or self-centered, especially when, like my father-in-law, we are devoted to caring for a chronically ill spouse or family member.

It takes a 6-year old to ask, “Baba, why are so you mean to grandma?” to catch us up short and confess that Sabbath rest feels strange and unfamiliar, even after 3 millenia. Leah’s question reminds us that, We have this treasure in clay jars to make it clear that this extraordinary power comes from God and does not come from us. We are very useful clay jars for God, but also limited, even fragile. From our vantage point, it becomes clear why God made rest, and the freedom and well-being it offers, a commandment. Forced grace. Stop and receive life-giving rest.

For Baba, rest and Sabbath came in the spring of 2006 when, after being on the waiting list, a spot opened for Joan to move into the Memory Care unit at a Senior Living facility. But when we are accustomed to doing everything, Sabbath grace is hard to accept. Of course, Baba’s first response was that he was not ready to put Joan in a care facility, and he could continue to care for her at home. Like most of us, he believed he should “climb faster” and try harder. His four adult children thought otherwise, and he eventually agreed. Forced grace—admitting to being a clay jar—became an invitation to step into rest and well-being for both of them.

As a family, we will be forever grateful to Judy, the director of the memory care unit, who explained to Dan’s father that when he allows the staff to take care of bathing, dressing, preparing food, and giving medicine, it frees him to do what only he can do—offer Joan love, affection, memories, and the continuity of relationship that defined their life and ministry for over five decades. Without knowing it, she described Sabbath rest which would free Baba to love Joan as only he can. Baba spent time with her every day—he helped her eat, they took walks, and looked at pictures—all offered without irritation, because Sabbath was now a part of both their lives. In Paul’s words, they life of Jesus was made visible in their bodies, when they accepted they were clay jars. Joan actually improved for a while, and they both had an increased quality of life for her remaining 1 ½ years.

As the calendar turns toward summer, it’s the perfect time to ask yourself what Sabbath rest your body and soul crave. What will bring you freedom, nourishment, wholeness and well-being? What will restore your soul, making you, as a clay jar, more useful to God?

This summer accept God’s gift of forced grace, scheduled rest, and unhurried renewal. With Baba, you will be freed to love more deeply and live more generously, making visible the life of Jesus through you!