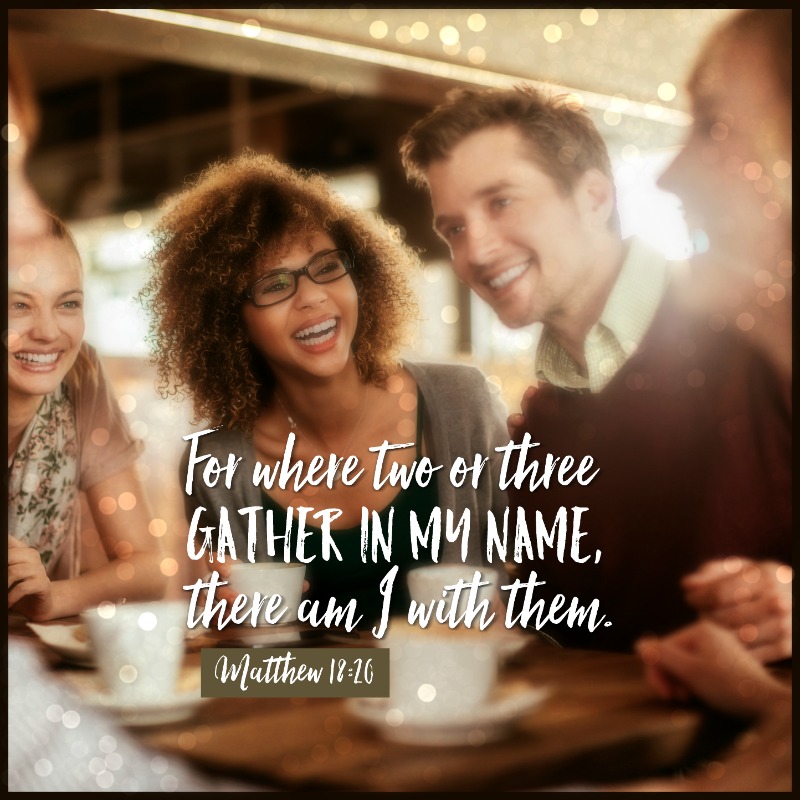 It took me a long time to stop being surprised by sin. I didn’t want to see it in those I loved, in myself and certainly not in my church. I was well into adulthood before the sin and brokenness in Christians stopped surprising me. I have served three congregations as a solo pastor and two of them suffered from significant conflict.

It’s why many people say that they don’t come to church—you’ve probably heard it as often I have in casual conversation in daily life: "the Church is full hypocrites." The Barna Group has done research that bears this out. The #1 reason people don’t go to church is that “it seems irrelevant today, and there are too many moral failings of its leaders—they’re hypocrites.”

When I hear this, part of me wants to say, “welcome to the club!” Of course, we all our hypocrites including those who cite this as their reason for not joining us. There’s not a human being on the planet—not me, not you, not our Bishop, the Pope nor Mother Theresa, who behaves perfectly according to their faith and principals every moment of every day. The Apostle Paul wasn’t kidding when he said, “all sin and fall short of the glory of God" (Romans 3:23).

But when my husband and I worked in new church development, I was saddened by how many people we talked with who had been hurt by someone in the church—stories from all different denominations, pastors and lay people, members and employees. And it wasn’t just that people had been hurt by the church, but that there was no accountability, no process, no repentance, no effort at healing.

Perhaps if congregations of every stripe read Matthew 18 with more rigor, there would not be so many people who stayed away from churches because of a perceived hypocrisy combined with a lack of effort at repentance and healing.

In our text today, Jesus certainly is NOT surprised by sin, brokenness, and pain in the community of his followers. In fact, Jesus EXPECTS conflict to happen in any and every gathering of 2 or 3 people, even among his followers. Rather than criticizing us for having conflict, Jesus gives us two things that distinguish the Christian community in dealing with disagreements and pain.

The first thing Jesus gives us is a process by which to deal with conflict or hurt when it inevitably happens. Some congregations have even put this passage, Matthew 18, in their Constitution:

The first step is that you speak directly with the person who has hurt you or who’s behavior is harming the community (I would qualify that by saying, "only as long you feel safe doing so"). This also means that it’s not appropriate to go tell everyone else what so-and-so did when you haven’t spoken to that person yourself. If that doesn’t resolve it, then you bring 2-3 people into the conversation. If that doesn’t resolve the issue, then and only then do you go to step three in which you bring the issue into the public before the whole community.

Matthew reads as if you do bring your issue before the whole community, that they will see things your way. But of course, the whole point of the passage is that we might also be found in the wrong and in need of repentance. As followers of Jesus, all of us then, must be willing and open to have our sisters and brothers in Christ admonish or challenge our behavior, as much as we are called to do this for others.

When I arrived at one of the congregations I served, there was a very active couple who were relatively new members. I had a great rapport with the husband, but I could tell his wife did not like me or my style, or my "out there” personality (I admit that when I was younger I was much more “out there” than I am now!). After several months, they each wrote a single-spaced one-page letter to the President of the congregation, which he brought before the Council. It detailed all my faults and shortcomings and excoriated just about everything I did in a cruel fashion.

Were there things that I needed to learn from what they said? Absolutely, but it was hard to hear them because their method was so deeply painful. Of course, I wanted them out of the congregation, and I was surprised to see a couple Council members who were upset over their possible departure. Did they not just read the same letter I did?

Jesus concludes his conflict resolution process by saying that if the offending person does not listen to the whole community then, we can treat them as “a Gentile and as a tax collector.” Matthew’s community might have breathed a sigh of relief, like I did, after receiving those letters—at least after doing this three-step process Jesus lays out, we can kick the buggers out!

Well, not so fast. We have to ask the question, “how did Jesus treat Gentiles and Tax collectors?” Well, he hung out with them, he healed them, he called them to repentance, he forgave them, and he kept reaching out to them to bring them into the fold of God’s love!

But the sinful behaviors needed to be changed, and I think this is the hardest part for us in the church. We jump so quickly to Christianity as some milk toast pablum of “being nice” which sometimes allows harmful and hurtful behaviors to go on unchecked. When Jesus engaged with sinners, he wanted the harmful behavior to stop: Jesus told the woman caught in adultery to go and sin more (John 8:1-11); Zacchaeus, the tax collector paid back those whom he had defrauded 4-fold, and he needed to stop cheating (Luke 19:1-10). Even today’s passage in Ezekiel affirms this need for repentance, “As I live, says the Lord God, I have no pleasure in the death of the wicked, but that the wicked turn from their ways and live.” But once confronted and amended, the person then must be forgiven and welcomed and restored to community.

A couple of weeks after those awful letters arrived, there was a crisis in the family of the couple who wrote them. Their adult daughter had attempted suicide and she was in the ICU. They had not transferred their membership even though they had stopped coming to church. I was still their pastor. To be honest, I wanted to run screaming in the opposite direction; I knew that I did not have the emotional nor spiritual strength to go to the hospital. I went into the sanctuary and kneeled at the railing. I stayed there and prayed a long time—I told Jesus I didn’t want to go--but Jesus kept me on my knees until I could go to the ICU and make my visit about them and their daughter, and not how deeply they had hurt me.

When I walked into the ICU, they were as surprised to see me as I was to be there. After a prayer, the mom and I went out to the waiting room and she said to me, “I’m so sorry I wrote that letter, I don’t know why I did it or what got into me.” If Jesus hadn’t make me go, I probably never would have received her apology and the healing that resulted.

How many times do we forgive and welcome them? Is three tries enough? In verse 21 of Matthew 18, four verses after our passage today, Peter asks this question of Jesus, “Lord, how often will my brother sin against me, and I forgive him? As many as 7 times?” Jesus said to him, “I do not say to you seven times, but 77 times." Seven is the number of completeness on the Bible, so in other words, your willingness to forgive needs to be limitless—just as God’s love and forgiveness of YOU is limitless.

And that is the second thing that Jesus gives us when conflict happens—first he gives us a process, then he gives us a promise—the promise of his presence: “For where two or three are gathered in my name, there I am among them.” When the woman who wrote the hurtful letter apologized, it was Jesus’ presence with us who helped me say, “I forgive you.”

Jesus promises us as his followers that he is with us—in the process, in the conflict, in hurt, in pain, in forgiveness, in restoration and in community. When we’re running the business of the church, it’s easy to forget that Jesus is right there in that room, around that table with us. Maybe we should make sure there’s an empty chair at every church meeting as a visual and concrete reminder that Jesus is sitting right there and calling us to love our neighbor as he loves us.

That couple never did come back to church, but I would call them periodically and see how they and their daughter were. During one phone call, they told me that she was doing great and was engaged to be married.

I have a colleague who, when she does her new member class at church—she tells them up front:

We are doing our best to be a loving community for each other. But we’re human and we make mistakes. There will be some point when we hurt or disappoint you—not because we want to, and not because we don’t love you and love Jesus, but because we are human and we’re all sinful. And when that happens, I hope that rather than leaving, you will stick around and talk with me or our church leaders about it. Because being aware of our sins, and asking for and receiving forgiveness is when the really great stuff happens—a deeper sense of belonging, a profound connection to each other, and the power and presence of Jesus Christ is seen and felt and experienced.

A seminary professor at Luther told another story of one such community. One of his students came from the Mennonite tradition. In his congregation, when someone’s behavior needed to be admonished or corrected, they would not have a one-on-one “confrontation”, but rather, they had a “care-frontation”. The offended person would bring sandwiches and have a “care-frontation” with the person that hurt them—so that the wrong-doer would know that they came in love, with a desire to keep them as a loved and growing soul in their church.

This is the kind of community to which Jesus Christ calls us. Not perfect and surprised by sin, but human and broken and accountable and forgiving and reconciling—a place where Jesus’ presence is seen and felt and experienced in one another. That’s what people today want in a church—a community of integrity and grace and care, where harmful behavior is not excoriated and beaten with the stick of judgment, nor allowed to flourish unchecked, but rather, one characterized by Matthew 18 and its instructions for “care-frontation”.

When we show up in the world with these values and behaviors, people out there will know what kind of community we are in here. Our story doesn’t end at hypocrisy—that’s where the really good stuff begins! For amid our human failings, we are a church where the process, the promise, the presence and the power of Jesus Christ is alive and active in every one of us and where two or three are gathered in his name. Amen