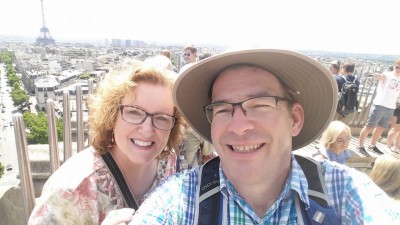 Those of you on Facebook might have seen that I recently spent 3 weeks in Sweden, Norway and France. For the Scandinavian portion of our trip, we traveled with one of my sisters, Pam, my dad, and his girlfriend, Helen along with our daughter, Leah and her best friend, Morgan. So we were a group of 7 traveling together for 2 weeks with the goal of not only sightseeing, but meeting some of my parent’s cousins whom my dad had met on previous trips.

In many ways, it was the trip of the lifetime and things went as well they possibly could as a logistically complicated trip with 7 people who had never traveled together. We had fun, saw incredible beauty, and had the loveliest and most meaningful time with cousins in both Sweden and Norway. We had 2 nights left on the Scandinavian portion of our trip after which Pam, Dad and Helen would head home, and my husband, Dan, Leah, Morgan and I were going on to Paris for a family wedding on Dan’s side.

I was tired, but feeling silly and was goofing around and I said something that Dan found hurtful. I didn’t even know I had hurt him, until he told me privately later. I didn’t mean to hurt him, I wasn’t mad, I didn’t have any underlying, unresolved issues; on the contrary, I felt so blessed and grateful, like one of the luckiest people in the world to have had these experiences.

But there it was: the weed of sin, brokenness, and my own capacity to hurt someone I love the most—coming up, sprouting, and bearing painful, rotten fruit.

This parable of the wheat and the weeds, like the parable of the sheep and goats, are parables of judgment which only appear in the Gospel of Matthew. The Christians to whom Matthew writes in the late first century, are less concerned about their own sin, as they are about those who are not true believers, who do not believe that Jesus is the promised Messiah. Matthew’s audience is also struggling against the power and oppression of the Roman empire—the Temple in Jerusalem had been destroyed, and their safety, livelihood and faith were all threatened. They wanted God’s judgement on these evildoers in their community and in these larger structures of society.

We can understand why people who are victims of oppression, violence, war, abuse, or terror of any kind, want the evil that caused their pain, eradicated. This is as true today as it was in the first century. There is sin in the structures, institutions and governments that exist in this country and around the world.

We’d like to think that it’s as simple as “some people are good and some people are bad,” allowing us, with Matthew’s community, to suppose Jesus’ harsh words in this passage apply to the evil and sin of those people over there, and in those structures, religions or countries over there. It would be nice if this were true—we wouldn’t have to look at ourselves.

In verse 41, however, Jesus says, “The Son of Man will send his angels and they will collect out of his kingdom all causes of sin and all evildoers.”

So it’s—not just all those other evildoers—those people and those oppressive systems over there —but all causes of sin, including in here, in our own hearts. Jesus doesn’t let us point the finger at others’ so easily.

In our passage from Romans, Paul goes as far to say that the whole creation itself is broken from sin and groans with us to be restored from decay and death. But the decay and death, the tsunami and the earthquake, the hurricane and the drought, do not prevent us from beholding the majesty of Norwegian fjord or the Rocky Mountains, the hope of a new sprout in spring, the awe of a breath-taking sunset, the peace in a family of deer in the twilight, or the sacredness in the face of a newborn.

Reformer Martin Luther explained this experience of the wheat and weeds, the sacred and sinful, the beautiful and the broken, the love and the pain, indeed, the very goodness of God existing side by side with evil, in his teaching that we are, simul justus et peccator: we are at the same time, sinner and saint. We are justified and made righteous through Christ on the cross AND we live in a fallen state. We cannot escape sin until the Son of Man returns and brings the kingdom and the whole creation to fulfillment.

Paul describes this eloquently in Romans chapter 7 when he says, "I can will what is right, but I cannot do it. For I do not do the good I want, but the evil I do not want is what I do. Now if I do what I do not want, it is no longer I that do it, but sin that dwells within me."

And so out come hurtful words from me, even while I am feeling embraced by God and loved by family.

You may have heard of the Rev. Nadia Bolz-Weber, who is an author and an ELCA pastor serving in Denver, CO. She’s a recovering drug addict with tattoos of the church calendar up both arms, and she has a growing and unique ministry to people in recovery from addiction and others, who need to hear the Gospel of grace. Several years ago, I heard her speak at one of our National Youth Gatherings, and she told the story of learning from her now-husband, (also a Lutheran pastor) about Luther’s understanding of Simul Justus et Peccator. We are at the same time, justified by Christ and a sinner.

I’ll never forget her saying that it was the first time somebody explained to her why she had this great capacity to hurt and damage others, AND also had such a great capacity to love and to do good. The truth that God, in Jesus Christ, forgave her sins and worked through her to bring love, forgiveness and joy to others, EVEN WHILE she would always struggle with brokenness and the effects of addiction, led her on a journey of faith and a call to ordained ministry. THe congregation she started in Denver is in fact called "House for All Sinners and Saints."

After he describes our inner struggle between good and evil, Paul says, "There is therefore now no condemnation for those who are in Christ Jesus. For the law of the Spirit of life in Christ Jesus has set you free from the law of sin and of death."

On our trip when Dan told me I’d hurt his feelings, I apologized profusely and felt terrible. The next day, I was still subdued and as we walked to our first destination, he came up and held my hand. He forgave me and we moved forward, enjoying the rest of our trip, which was as wonderful as the first two weeks.

Saturday morning, when I asked Dan permission to share this story of hurting his feelings on our trip, he asked, “what are you talking about?” He didn’t even remember it. That’s what Paul means when he says that Jesus sets us free.

Forgiveness sets us free—free to continue to love and serve! Forgiveness waters and feeds the good seed that God has planted in us, helping us to bear the life-giving fruit of forgiveness, love, joy peace, patience, kindness, goodness, gentleness and self-control.

These fruits of the Spirit enable us to participate with the good wheat in others, in our society and world, all the while trusting that Jesus will return. At the end of the age, the Son of Man will defeat all causes of sin in us and the whole universe, including death itself, restoring us, with all of creation, back to God.

Through Christ, we all will return to God, the very source of love and all that is good—who doesn’t even remember our sin—and instead, makes us shine like the sun!

Picture: Dan and me at the top of the Arc d' Triomphe in Paris with the Eiffel Tower in the background.